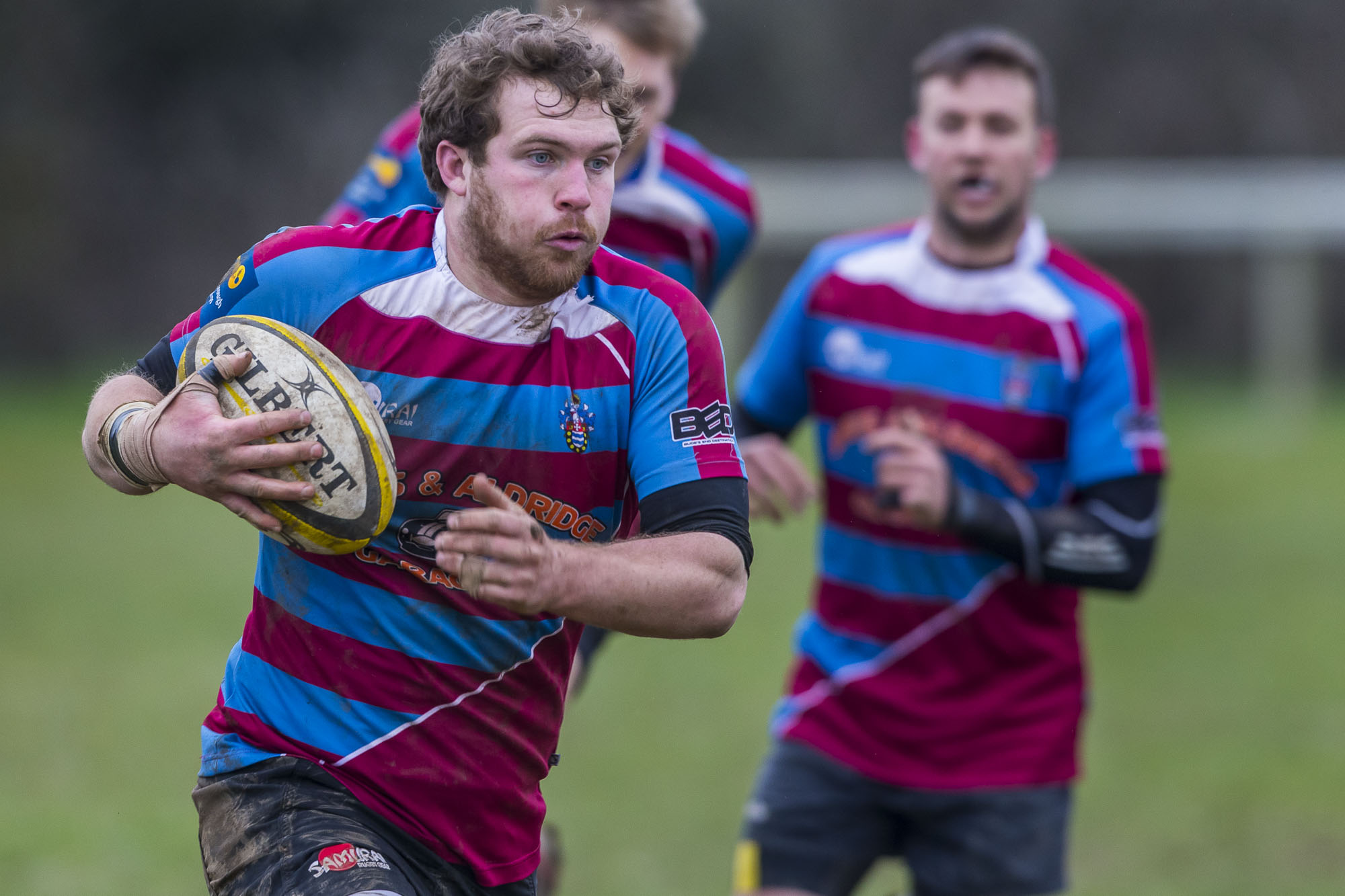 The home side had won all of their ten opening games and were looking to bounce back from their 48-12 defeat at free-scoring Honiton a week earlier.

However Hodges’ side were also unbeaten in the league since September and headed to South Devon looking for their ninth win on the spin.

As usual Bude had to change their side around as loosehead-prop Adam Black and second-row Joel Troke came in for the unavailable Simon Jeffery and Steven Bromwich.

Scrum-half Olly Mounce was fit enough to replace the benched Will Pharo while Steve Yates was drafted in at fly-half for the injured Charlie Watton.

The first-half was a forgettable affair as both sides battled away without making much headway.

Home fly-half Al Murray was unsuccessful with two long-range penalties while Bude failed to build up much of a headway, as they made a handful of mistakes just as it looked like they were going to break through.

While the opening 40 minutes failed to come to life, the second-half sparked into life within the first minute.

Bude’s return kick from kick-off was picked up deep inside the home half. After working their down the left, winger Reegan Spencer was tackled on the 22. However the ball was worked into the midfield and after a couple of forward pods, Devon number eight Tim Coats charged through a gap from ten metres out for the first try of the contest. The conversion was missed.

The Cornishmen knew they needed to hit back quickly and they did so from the restart.

After catching the ball, a ruck was formed and Bude worked it out into the backs. Sharp, who was playing at outside-centre, managed to get around the winger and then beat the covering full-back Thomas Tabb for a 50-metre try. Olly Denford missed the conversion and it was all square.

With the wind and slope in their favour, Bude had no excuses not to push on and they grabbed their second score on 52 minutes.

From a five-metre scrum, Bude’s pack proved too strong and number eight Joe Wilson picked the ball up at the base and crashed his way over. This time converted for a 12-5 lead.

Bude decided to keep the ball in the forwards as much as possible.

Plymstock’s frustrations continued to mount and blindside-flanker Derek Ingleson was sin-binned close to the hour after being adjudged to have played the ball while off his feet at a ruck.

With around ten minutes to go Bude grabbed a crucial third try and it was Hodges who led by example with a try similar to Sharp’s.

After some good hands going left, Hodges spotted another overlap and with winger Kieran Jamieson drifting too far to the outside, Hodges flew through the gap and outpaced Tabb to run in from 40 metres.

The rest of the contest saw the Oaks penned in the Bude half without failing to trouble the scorers as Bude held on for their six win from seven on their travels.

Reflecting on the game, Hodges knew that if they could step it up in the second-half they’d win.

He said: “It was an interesting game. At 0-0 at half-time it felt more frustrating than anything, as we couldn’t build much continuity, which was always likely to happen in a top of the table clash when each team are 100% up for it.

“But at half-time I was fairly comfortable. We’d been playing up the hill and into the wind. We were either going to drop off or start finding our legs a bit and I thought it would be the latter. All we had to do was keep the ball and the scores would come. In the first-half we had a fair bit of pressure but kept making mistakes so we knew if we kept the ball we’d start scoring.”

Hodges admitted that the result should act as a springboard for the rest of the season.

He said: “There were a lot of nerves with them being top for the first part of the season but I came away thinking that we’re a really competitive team in this league and if we can build on this and keep taking small steps forward then we’re in for a really good season.

“At the beginning of the season it was debatable as to whether it’d be beneficial for us to be promoted, but after games like Saturday and the wins over Honiton and Penryn, I don’t think we’d struggle that much in the league above.

“If we can build on our consistency on things such as turning up and having a consistent team selection then there’s no reason why we wouldn’t be ready for that step up.”

Promoted South Molton are the visitors to Bencoolen Meadow on Saturday and Hodges expects a tough test against their sixth-placed Devon visitors.

He said: “To make the step up and still do well shows good commitment and it’s impressive. With the amount of near misses we’ve had we don’t want to see any complacency. Continuity is important. We want to show everyone we can play well in every contest we have.”