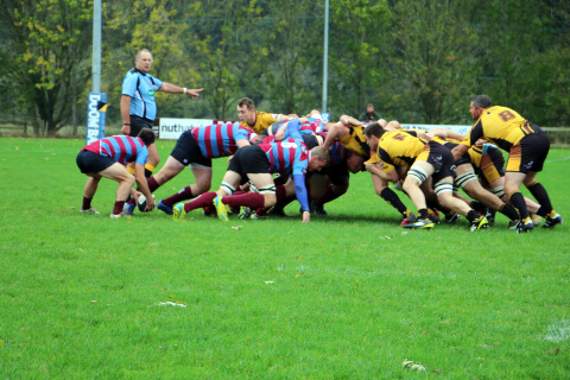 PLAYER/COACH Angus Hodges admitted his Bude side never got started as they were dumped out of the Tribute Cornwall Cup at Molesworth Field.

Bude have made an excellent start to their Cornwall and Devon League season, currently sitting in third with five wins to their name from six outings.

However against the Camels, who are currently ninth in the league above, the Tribute Western Counties (West), the visitors were given the runaround.

Hodges’ cause wasn’t helped by having to yet again make a number of changes from the thrilling 38-24 victory over Honiton the week before.

On the bench, there was a call-up for club chairman Paul Cholwill.

Bude knew they’d have to put in a sterling performance to progress against last year’s runners-up but found themselves behind inside a minute as giant number eight Dave Livett crashed over from close-range, which was converted by fly-half Danny Thomas.

The Bencoolen Meadow outfit needed a response but were all but out of the game after 21 minutes as the Camels added three further tries.

First, Joe Pretty ran through to score before lively scrum-half Owen Wilson took a quick tap penalty to run in from 15 metres and outside-centre Will Pengelly finished off an excellent move which started with a penalty on their own ten-metre line with a dummy runner allowing him to gain space on the outside to run in from 60 metres. Thomas converted two of the four tries and Wadebridge looked like they could be on for a massive score.

To Bude’s credit they started to get back into the game through their strong pack and dominance at the scrum, and they grabbed their first try on 32 minutes as a five-metre scrum allowed number eight Ed Aldridge to barge his way over. Olly Denford converted.

Aldridge’s try had given Bude a glimmer of hope but that evaporated within ten minutes of the second-half.

Winger Sam Thomas was the first to score after a clever move. Wilson looked as if he was going to a kick a penalty into the corner for a lineout. However, he simply tapped it and passed it out wide for Thomas to score in the corner.

Wilson was then on the scoresheet once again himself five minutes later. Danny Thomas again missed the kick.

At 34-7 it was about showing some pride for Bude, and it was Cholwill who led from the front.

A driving maul from ten-metres out ended with the replacement lock dotting down.

Bude got to the 64th minute before Wadebridge added their seventh try, which was Wilson’s hat-trick as he sniped his way over from close-range after some quick rucks from a lineout.

Three minutes later, Pengelly ran in from 40 metres after a turnover before Sam Thomas got his second soon after.

Bude’s misery was complete with four minutes to go when Pengelly brilliantly intercepted an offload and went on a storming run from 60 metres to score.

The rest of the game was played out with Hodges admitting they never they never showed up.

He said: “It was a disappointing game from us.

“Although they’re in the league above us, through the week we said we could we could beat them, but I do believe that because it was a cup game, physiologically turn up, so unfortunately we weren’t switched on early enough and they outplayed us in every aspect.

“The biggest difference was that they turned up and ready to play. They came second last year and were really fired up and we were at the other end of the stick. We played alright for about 15 minutes but not for the other 65.

“We had a few boys out and a few injuries, but if we turned up properly, we should have been able to overlook that and play much better than we did.”

Bude are back in league action on Saturday at Withycombe, and Hodges expects a response.

He said: “Hopefully a few of the boys who we had out will be back. We just need to train well this week and make sure we’re a lot stronger.

“They’re pretty low at the moment in the table (11th) but in our first game last year we played them away and got turned over pretty heavily. We need to perform well this week, we owe it to ourselves after Saturday. We need to get back into our game and play our style of rugby.”