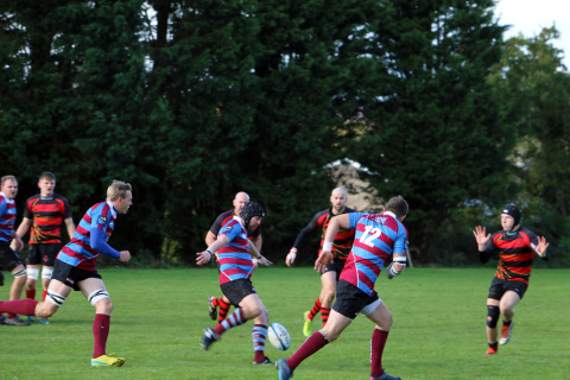 BUDE put in a workmanlike performance to defeat Liskeard-Looe 24-13 and cement third place in the table ahead of Saturday’s vital clash with Penryn at Bencoolen Meadow.

The North Cornwall club scored 78 points at Withycombe seven days earlier and made just the two changes for the clash at Lux Park as Charlie Watton came into the side at inside-centre in place of Tremaine Fry, which meant that player/coach Angus Hodges moved to Fry’s spot at openside-flanker, while Tim Green made his first appearance of the season in place of Jack Horwell on the left-wing.

Talismanic number eight Joe Wilson was also fit enough to make the bench after a number of weeks out with a torn calf.

Bude failed to impose themselves early on but took the lead on nine minutes.

Skipper Olly Denford broke the line after receiving the ball on halfway and headed for the right-hand corner before passing to Hodges on the right-wing some 30 metres out, who beat the defenders for pace on the outside to score his 13th try of the season.

Liskeard were big up front and scored their first try on the quarter-hour as tighthead-prop Ben Palmer muscled his way over from close range. Inside-centre Nick Parker converted to give them a two-point cushion.

That lead was extended to five points as Parker slotted a penalty before Bude grabbed their second try on 35 minutes through Kieran Sharp.

His midfield partner Watton made a break from 40 metres out and was tackled with just ten metres to go. With the majority of the defence not back in time, scrum-half Olly Mounce passed it out to Sharp who had the easiest of run ins from ten metres. This time Denford converted and Bude had a 12-10 lead at half-time despite playing nowhere near their best.

The visitors were next to score in the 46th minute and it all stemmed from great work by Sharp.

After Watton sent a kick through to the full-back Ieuan Evans, Sharp got there first, ripped the ball out of his hands, ran forward and then passed to replacement Tremaine Fry for the easiest of run ins from ten metres. Although Denford missed the conversion, Bude were seven points clear.

Near the hour, the hosts responded again through a Parker penalty before Bude grabbed their bonus point try with 15 minutes remaining.

Some good hands saw the ball worked out to the right-hand side where Hodges and Denford had a two-on-one.

This time it was Hodges who turned provider as he played in the full-back for his first try of the afternoon.

The rest of the game was played out with the home side dominating possession but failing to find a way past the visitors’ well-drilled defence, which meant Bude left Lux Park just four points off leaders Plymstock Albion Oaks.

Reflecting on the game, Hodges admitted that despite the result, improvement is required.

He said: “It was a frustrating game for us, at the end of the day we got a five-point win so you can’t ask for much better, but performance wise we had an off day.

“When we turned up we saw it was quite a narrow pitch so we knew we’d have to keep the ball a bit closer but unfortunately we ended up playing really tight which made it easy to defend against.

“Our ball retention was really poor to begin with and we had quite a few handling errors which slowed us right down. We struggled to build any continuity in the first-half, which again didn’t help us playing an expanded game. It was like just a spirally circle really, which meant we played less rugby.”

Hodges knows they’ll need to play much better this weekend and he hopes for a repeat of their last home league game when they beat Honiton 38-24.

He said: “Last year we played them in the wet, which limited both teams although they beat us both times. They’re similar to Honiton but we were strong enough to deal with them. But if we turn up mentally, have a good week’s preparation and play our style of rugby then there’s no reason why we can’t come away with a win.”

Kick-off at Bencoolen Meadow is at 2.30pm.