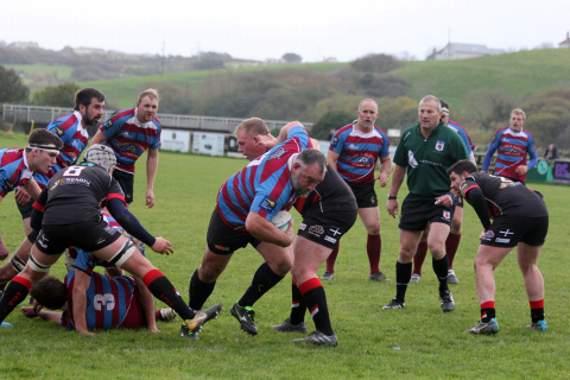 BUDE leapfrogged Penryn into second place after withstanding a late fightback at Bencoolen Meadow to win 27-19.

The North Cornwall side scored four tries — two in each half — to go 27-5 up with a quarter of the game remaining before the visitors’ late rally, albeit to no avail.

Despite winning 24-13 at Liskeard-Looe seven days earlier, player/coach Angus Hodges made four changes in the starting 15 including being able to name two of his most important players as inside-centre Ed Hilliam-Cooke made his first appearance since breaking his wrist on the opening day of the season and number eight Joe Wilson was also back for his first start since tearing his calf. They replaced Steve Yates and Simon Jeffery respectively with Adam Black moving from eight to loosehead-prop.

Kyle Speare made a rare appearance on the wing while Tremaine Fry was preferred to his brother Finley at blindside-flanker.

Penryn have a talented squad and made the long trip in confident mood having lost just once themselves.

However Bude attacked them from the first whistle through the forwards and went 7-0 up within five minutes.

Hilliam-Cooke received a pass from scrum-half Olly Mounce five metres out and used his strength to run through a two-man tackle to score. Skipper Olly Denford converted.

On 16 minutes they went 10-0 up as further led to Penryn being penalised just outside the 22. Denford slotted the penalty.

Both teams looked dangerous when they got the chance with the visitors using more of their backs, although for the most part, the defences held out well.

Penryn halved the deficit when inside-centre Andy Seviour touched down under the posts.

However Bude had regained their ten-point lead by the break.

Hooker Jason Bolt went on a 30-yard rampage up the field before being tackled. The ball was then played out into the backs, who managed to get up to the 22 before Black collected the ball, ran over the top of the ruck and scrum-half Dan Duval to score from 20 metres out.

A ten-point advantage is easy enough to claw back but five minutes after the interval, Bude were even further ahead.

A penalty was kicked to the corner and from the resulting lineout, a driving maul was formed and from five metres out, second-row Joel Troke was pushed over the line. Denford kicked the conversion.

On the hour, Bude had their bonus point try.

Wilson played the role of emergency scrum-half ten metres from the Penryn line, dummied and ran through the gap next to the ruck to make it 27-5.

In the latter stages, Penryn knew they had to throw caution to the wind as they needed three further tries or to get within seven points to secure a losing bonus point. And to their credit they went close through some excellent backs moves.

James Salisbury’s try and Seviour’s second score of the afternoon, which were both converted by Paul Saberton, meant they were just eight points behind.

However from the kick-off, Bude regained possession and ended the game with the ball close to the home line to ensure their sixth successive league win and most importantly, sit just three points off league leaders Plymstock Albion Oaks.

Player/coach, Angus Hodges, admitted that the game had added significance.

He said: “There was a massive build-up to it and we knew it’d be extremely tough. They turned up nice and early and were ready to go for what was the biggest game so far, but we hadn’t lost at home.

“There was a really good vibe around the boys beforehand and we knew we’d have to do a lot of hard work and dig deep and we did that.

“It was much anticipated and there were a lot of nerves going into it, but the boys really stepped up and fronted up and made some big collisions. Even at 27-5 ahead we knew we had to be right on it and not give them a sniff as they were playing quite well. But to get five points and them get zero is a great day at the office.”

Hodges admitted that it was a real team performance.

He said: “No-one had a bad game, we had the advantage in the scrums and lineouts and we fronted up really well so I couldn’t ask for much more.”

Hodges has been at the club now for a couple of seasons and paid tribute to the supporters.

He said: “Ever since I’ve moved here, I’ve beeen really impressed with our crowds, especially at home. They really give us that extra drive.

“That’s been one of the biggest factors so far and it really does wonders for the team.”

With the Tribute Cornwall Cup taking priority this weekend, Bude are back in league action next Saturday when they make the long trip to Penzance to take on Pirates Amateurs (2.30pm).